If there’s an indisputable argument that true love is a real thing it’s probably the band Johnnyswim performing on stage. When we were fortunate enough to see them at the Troubadour in Los Angeles just over a week ago, the opening band—one of their close friends—jokingly suggested their chemistry is “just a ruse.” But from the moment the young married couple Amanda Sudano and Abner Ramirez take the stage, it’s obvious that the two are unconditionally, joyfully in love with one another. And it’s infectious. 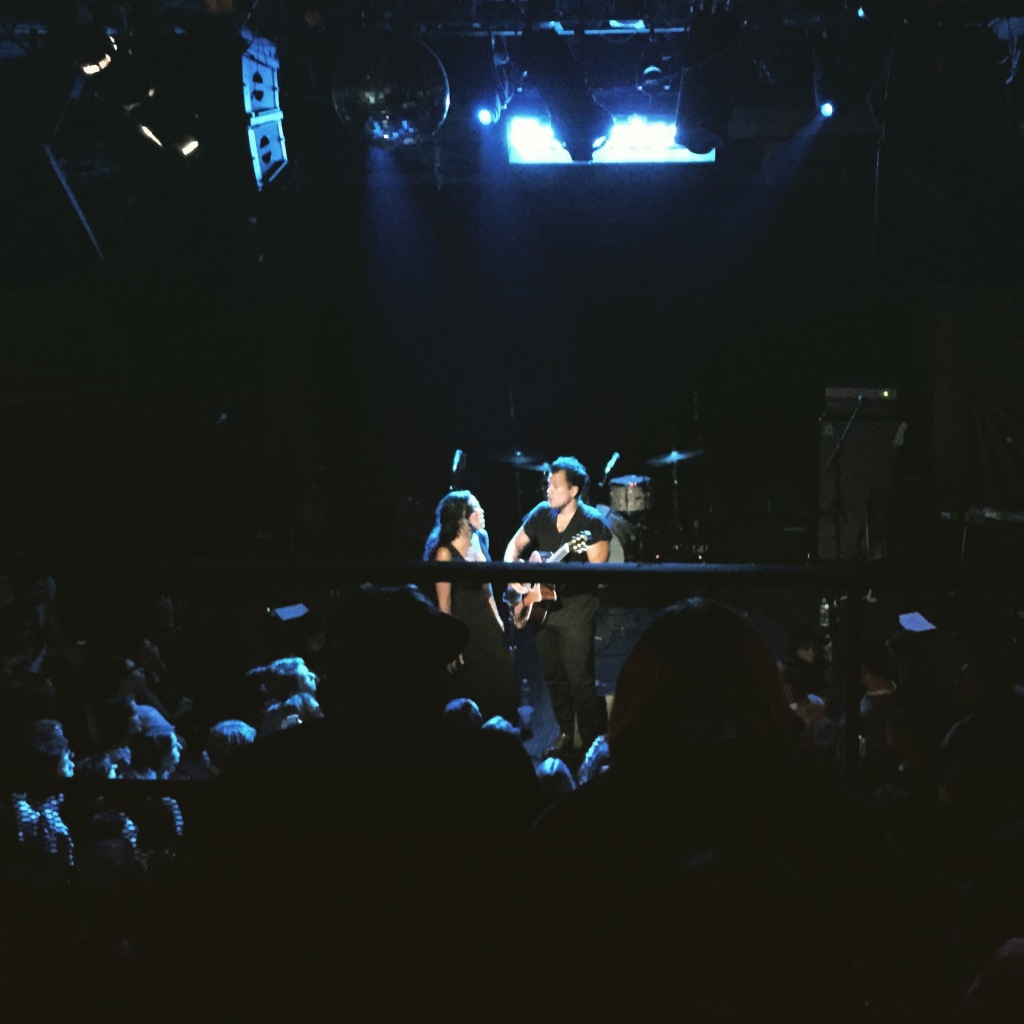 Through every song of their show, they dance flirtatiously with each other and send warm gazes across the stage. They’ve written all of the lyrics together, and the words are interwoven with their history, the strength that their relationship has provided, and the hope of what may come in a future shared together. In between tracks they tease each other about idiosyncrasies, talk about what it’s like to be both artists and soulmates, and recount some of the creative battles they’ve faced together. We were intrigued to find out that one of our favorite tracks, “Diamonds,” was written as a suck-it song to a former friend turned naysayer who thought that their musical aspirations would never succeed. He gave Abner a quarter and told him to call him when the music career failed and devolved into homelessness.

Some years later, they’re touring across the country, have performed on The Late Show and The Tonight Show, and in the cozy, historic space of the Troubadour, felt like a band inches away from breaking into the mainstream (if they want to). They also recently had a son, and that new life seems to have only added to the electricity and devotion they share together. They did a small set of acoustic songs that they would sing together while their newborn was still in the womb, and it was touching and adorable.

All of the chemistry simply heightens what is clearly an immensely talented group of musicians—not just Amanda and Abner, but also the instrumentalists alongside them. It’s difficult to pinpoint a genre for the music they play, and that adds to the uniqueness and the musicality. There’s folk, some Latin influence from Abner’s Cuban roots (he sneaks in some Spanish lyrics once in awhile), some twang from the years they called Nashville home, and even some pop and hip-hop beats on occasion. They closed with a mashup of one of their songs and Britney Spears’ “Till the World Ends.” It was awesome.

Altogether, we were grateful to be able to go to one of their live shows. Eric had only heard a few of their songs going into it, and he’s been playing their albums over and over ever since. The songs are great to wake up to, or to curl up on the couch to, or even to fall asleep to. And they’re best shared with someone you love.

It’s hard to find artists so genuinely dedicated to their craft that they keep pressing on through the obstacles of naysayers, the challenges of being in a relationship and being musicians on tour together, and not letting any of those struggles get you down. In a lot of ways they reminded us of us. Not because we’re super talented musicians, but because we feel that same kind of love in our own marriage and it has kept us strong through all of the peaks and valleys of life. True love isn’t some mythical, absurd thing; it is possible to find someone who makes you a better version of yourself and with whom you can create beautiful things together. And it’s possible to open up and share that love and hopefulness with other people in ways that makes them feel inspired—reminded that the world isn’t only a place of heartache and cynicism. No matter your situation, there are diamonds there waiting to “rise out the dust.” Johnnyswim are a wonderful reminder of that, and flat out amazing performers.